If You Have Veiling on Your Mind - Advent Veil Giveaway

Has there been a little nudge, maybe a whisper on your heart, about veiling during Holy Mass? That’s how it was for me. After years of pushing these thoughts out of my consciousness, I finally found my resolve when I re-encountered on old friend at a 50th anniversary Mass for a priest friend. She was wearing a veil and so I asked her about it at the following reception. Not only did she lend one of her veils to me, she gave me the insight to make my decision. If you've had veiling on your mind, maybe this post - or one of the others in this linkup - will give you that final little push.

So why veil? What makes veiling a desirable practice and why is it that the urge seems to be hitting more and more women these days? Let's look at our current state of affairs for a plausible (in my opinion) answer. We're seeing an across the board tone of disrespect, selfishness, and casual attitudes unlike any in my lifetime. From the barrage of  shocking 'celebrity' antics to the commercialization of even the sacred, we are being inundated with negative human characteristics. Abortion is backup birth control, children play violent games, and clothing is far from modest. It's enough to make me feel downright negative sometimes - but then I stop and raise my thoughts to God, and all that He is and all He has given us. This world is ours - to make of what we will. The gift of Free Will is ours and all we need to do, to make the world a better place, is within our own grasp.

I've been on a quest of sorts, to improve my own little corner of the world. As one of my friends likes to say, 'bloom where you grow'. Instead of focusing on the negative, that can be found all around us, I deliberately choose to create an atmosphere of the positive. I am a Gift of God. He made me and gave me the means to share my gifts with family, friends, and the world. If I obsess about the negative, I will leave a negative imprint on those with whom I interact. But if I choose a cheerful heart, it might just prove to be contagious - thus improving life for myself and others.

So, what does all of this have to do with veiling? For me, veiling is an outward sign that I have respect - respect for myself as a godly woman and respect for Jesus, present in the Eucharist. While I don't veil to please others, it is a sign that others can see. Veiling, for me, says that I acknowledge that I am in the Presence of the Lord Jesus Christ. I am not of the earthly world, I belong to the Eternal Life to come. As I lift the veil to my head, I become acutely aware that I am entering the Divine Presence. The weight of the fabric, the curtain it creates, gives me feeling of inspiration - a calm comes over me and I feel much more able to focus. In turn, the worldly concerns fall away - my soul lifts up to the divine. In veiling, I join a long line of women - like the Blessed Mother Mary - who practiced veiling. While it is no longer mandatory, veiling is still an optional, devotional act that is pleasing to God.

With Advent just beginning, why not consider veiling as a devotion to try - as a preparation for the coming of the King of Kings? As a 'little Lent', this time of anticipation and preparation would be a great time to humbly step out of our comfort zone. Like me, you might just find that it's not as difficult as you suspected. My daughter and I are still the only ones who veil at our parish, yet we find it to be a blessing. After a year and a half now, I doubt that our fellow parishioners even notice anymore - and even if they do, we are comfortable in performing this act of reverence for Jesus. 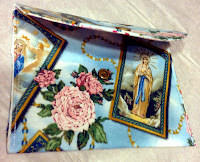 If you're considering veiling (or already do), be sure to check out the VEIL GIVEAWAY going on From Thursday, December 5 through Monday, December 9 below. If you're the winner, it might just be that extra nudge you need!

SURPRISE second item to be given away! Josiekat's Trunk has donated a beautiful Mantilla Pouch from
their Etsy shop. Since my chapel veil comes with its own organza bag, I'll draw a second name for this new item. 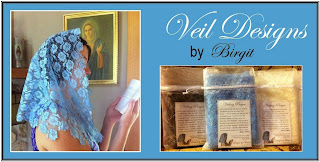 Follow this link to Veil Designs by Birgit to see some of the veils available for sale.
Posted by Birgit J at 10:27:00 AM