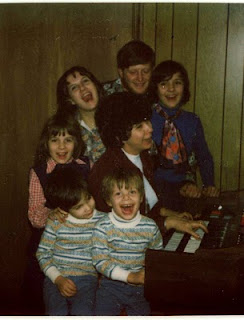 As the oldest of 6 children, I grew up in a happy, rambunctious German family…the Waltons, our friends would say, had nothing on us. Our mother, however, always sought balance in our lives…keeping us grounded. Even my earliest memories contained snippets of my mother's cautions to us, her children. It was never 'if' she got cancer, it was always 'when'. In her loving, motherly way, she sought to blunt the blow even as she put the fear of God into us in morbid anticipation. After all her grandmother died at an early age and her own mother died at 42 - both of breast/female cancer.

Time is short. Live well. Love deeply. Have faith, but as she would say, 'be realistic', even as I called her pessimistic.

Sadly her admonitions turned into reality and we watched Mom struggle for 5 years as she gallantly sought to win the fight. Mom in her 'realist' mode made the decision to have a radical mastectomy and bravely decided to forgo reconstruction. This was a decision she would later regret because, as bad as cancer is, not being 'you' makes it even worse. I don't think she ever considered that we have two breasts because, for the most part, our bodies are symmetrical. Remove one and your balance is off - forever. You have to dress discreetly because the CAVE left by the removal of a breast is not flat...it's deep...and wide. Even with prosthesis, she struggled daily for lack of balance, lack of 'normal' and a terrifying visual reminder of her battle.

And even so, the formidable enemy was not willing to succumb to surgery and chemo and prayers and hopes. After 5 years of brave struggle and heroic effort, Marie-Luise Annerose Suzanne Fingerhut Rumohr Atherton was laid to rest after dying in her own bed surrounded by family saying the Rosary. She was only 58. The race had been run and she crossed the finish line Home!

The years went by and one day, at age 48, my number was up...the lump in MY breast was cancer and so my journey began. I had learned a bit, though, watching Mom: spending nights with her when she couldn't be alone, going on the endless series of doctors visits this disease demands and always learning - holding it close to my heart. Now it was my turn.

My first reaction was flight. Run for the hills. Surrender to the beast because I 'knew' how this would end. Why would I have chemo and suffer the side effects? Why should I prolong the inevitable? Why shouldn’t I just wave the white flag of defeat and end this thing quickly?

My family was adamant but I persisted and sank into the darkest of nights in my heart and soul. I never asked 'why'. I never lost Faith in God. I just didn't want to fight.

And then a voice of reason, stronger than the pleading of my family rose through the darkness...a priest, who told me that I was morally obligated to fight, that must do all I can - for the sake of those who love me. He won me over. He gave me the armor I needed. He even sent me in the right direction...MD Anderson Cancer Center. That night I spent a bit of time before the Blessed Sacrament and my burden was lifted. I felt freer than I had since the verdict came down and I knew what I had to do.

The wonder of this circle of life is that you take something with you from every experience. Having been intimately involved in Mom's journey, I had pondered and I had learned. So when it was my turn, I stepped into the arena with guns blazing. Lump in one breast? Take it...and while you're at it, take the other as well! Why take a chance on a recurrence? If you're going to play the game you might as well give it your all.

But I'd learned something else as well. I had learned that state of mind is a powerful thing. Attitude DOES matter! I was fully on board for a complete recovery and for taking back my life. I wanted to feel like ‘me’ again...no more, no less.

It was also clear that I had come to the right place. MD Anderson knows that they are dealing with the whole person...not just 'parts'. They are there with options and answers for physical, mental, and spiritual healing. They will help you become 'you' again.

Cancer leaves scars both physical and mental. The most complete way to heal is to address both. You can go through chemo and surgery and follow-up appointments for the rest of your life but you will never again be an 'innocent'...your Garden of Eden has been invaded and you have been laid bare. The most obvious and accepted healing is the physical. You do away with the cancer and try your best to insure that it will not return but you are scarred emotionally. You'll always be a cancer victim. That's why it is vital to acknowledge that when a woman chooses to have reconstruction, it’s not about vanity…it’s about wanting to be as ‘whole’ as she can.

My route was long and tough. My doctors and I chose a free tram flap using belly fat to ‘create’ new breasts with my own tissue. If this procedure is successful you have your own tissue, which grows and shrinks with your body weight, and is very natural. The other options include a silicone implant or a combination of implant and tram. For once, being overweight was an advantage because I had PLENTY of belly fat/muscle to build two new ‘breasts’. An added benefit was that the belly fat from my lower abdomen would be gone for good.

In my fear and to lighten the mood, I referred to this as a combo ‘boob job and tummy tuck’. These were brave words, spoken in the face of fear and not a true representation of how a breast cancer victim actually sees this procedure. I was the little mouse, flipping off the eagle, even as those killing talons were inches away. It was a weak attempt at finding the silver lining and yet… 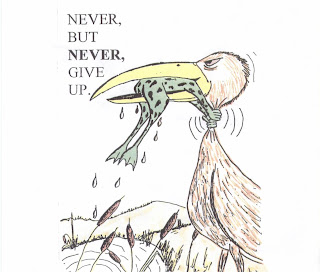 Sadly there were those who would begrudge someone who is fighting for their life. As someone who was trying to add

levity to a situation so grim that the outcome was unknown, this was unbearable. To allow for a 16 HOUR surgery to remove all cancerous tissue, lymph nodes and cells, was a powerful leap of faith. It was certainly not a play at vanity. The cut of cancer went deep but the unkindest cut was the realization that some people would somehow find fault with someone over something that they don’t have the vaguest idea about. Who would begrudge me a chance at my new ‘normal’?

Why would you tell someone fighting for their life that they were being vain? You should know this anti-makeup, natural Nana much better than that by now! Not to understand this was utterly heartless and cruel. All I wanted, all any cancer victim wants, was to be ‘me’ again…no more, no less.

Please, in your charity, at least allow me the dignity of that! 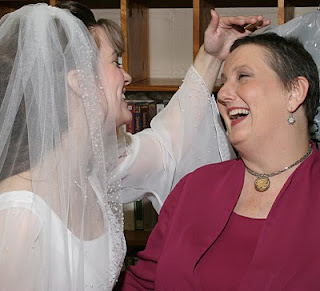 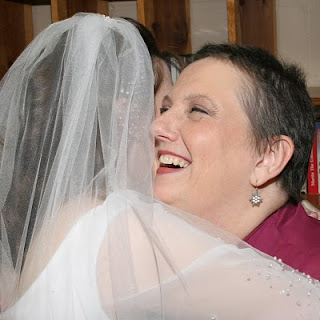 Note: now that 29 year old daughter, Erika, is the fifth generation (as far as we can trace), spare her your unjust judgment. She, too, only wants to be herself again...no more, no less!

So on February 17, 2011 she will, once again, go ‘under the knife’. For someone who is feeling well to submit to surgery – and the necessary recovery process – seems like an act of insanity. Unless…you can find it in your heart to understand the human drive to be ‘me’…no more, no less.

God bless you, honey, as you continue the path…

Loving Father, I entrust myself to your care this day; guide with wisdom and skill the minds and hands of the medical people who minister in your Name, and grant that every cause of illness be removed, I may be restored to soundness of health and learn to live in more perfect harmony with you and with those around me. Through Jesus Christ. Amen.

Into your hands, I commend my body and my soul. Amen.