It all started twenty years ago with a broken condom. My boyfriend, whom I barely knew, acted “professionally” and instructed me to take the morning after pill. I hesitated: what if I didn’t take it? I realized that I liked the idea of being pregnant but I did as I was told.

The pill didn’t work... I was pregnant! My heart was filled with joy. Like most pregnant women I suppose, I fell in love with my baby. I discovered that day that I was Pro-Life.

My boyfriend didn’t share my happiness and told me to “get rid of that”. Like most men in uncommitted relationships, I suppose, he was Pro-Choice. I didn’t want an abortion but I took the RU486 pill as I was told. I rationalized the decision: poor baby was rejected by her dad but we would have other babies later to replace this one.

The abortion was traumatic and left me with depression and self-hatred and the relationship didn’t last. One day, my ex-boyfriend saw my little sister holding my hand. To my surprise, he said that he regretted the abortion, that we should have a daughter just like her but we had killed her.

That was too much for me to take. I loved our child, yet I ended her fragile, precious life to please the one who got me pregnant. Now he was saying that WE made a mistake? I was overwhelmed with contradictory emotions. I had to do something to block them… so I became Pro-Choice. 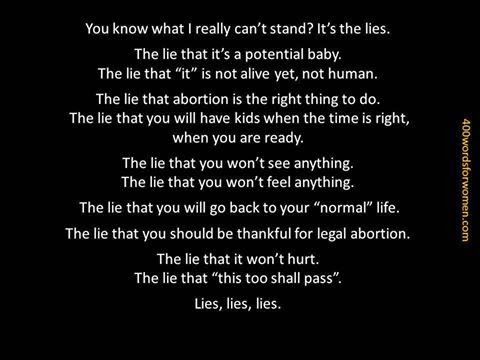 For the next thirteen years, I lived the Pro-Choice lie. I repeated to myself that abortion was a necessary evil, that the unborn is just a clump of cells. Those lies were in contradiction with my instincts and I swore to myself that, while it was OK to support it for others, I would never have an abortion again.


I found myself in an abusive relationship and pregnant. I didn’t want an abortion, I just wanted the man out of my life. But I was scared for the child, and the devil whispered in my ear that abortion was the only solution to protect my son from his abusive father. So I stained my soul again and I continued to lie to myself to be able to survive. Who was I kidding? I gave death to my children instead of life and I didn’t want to live anymore.

When I met my future husband (the first Pro-Lifer I have ever encountered), I was broken and fierce, anti-God and anti-life but he loved me anyways. With his support, I found the courage to face the truth: two children had died by my “choice” and I needed to grieve and deal with my emotions.

I have learned to forgive myself, those involved and to love again. I was restored and I came full circle. I gave birth to four children. I know that I’m where I’m supposed to be, the woman God intended me to be.

Behind a prickly post-choice woman, there is often a wound that needs to be healed, there is a lie that cries for truth, there is darkness that craves light. Being Pro-Life means not only supporting pregnant women but also listening to women who had an abortion and point to that healing, to that truth, to that light.

This guest post was written by Béatrice Fedor who blogs at www.400wordsforwomen.com and speaks up for the Silent No More Awareness Campaign. It is one of a series of guest posts, written by women who answered my question: What stirs your pro-LIFE heart?